How to make: Sky, Water and Glass

If you want to learn about mapping or if you have problems with certain maps you are in the right place!
Post Reply
1 post • Page 1 of 1

How to make: Sky, Water and Glass

If you already read my previous guides you should be able by now to create a simple map on your own, containing spawnpoints, basic lights and some blocks shapes. Now we are going one step further and learn about different properties that can be given to a simple block by tying it to entity or giving it specific texture.

1. First create empty block and make it hollow as i showed you before. This will be our map borders. 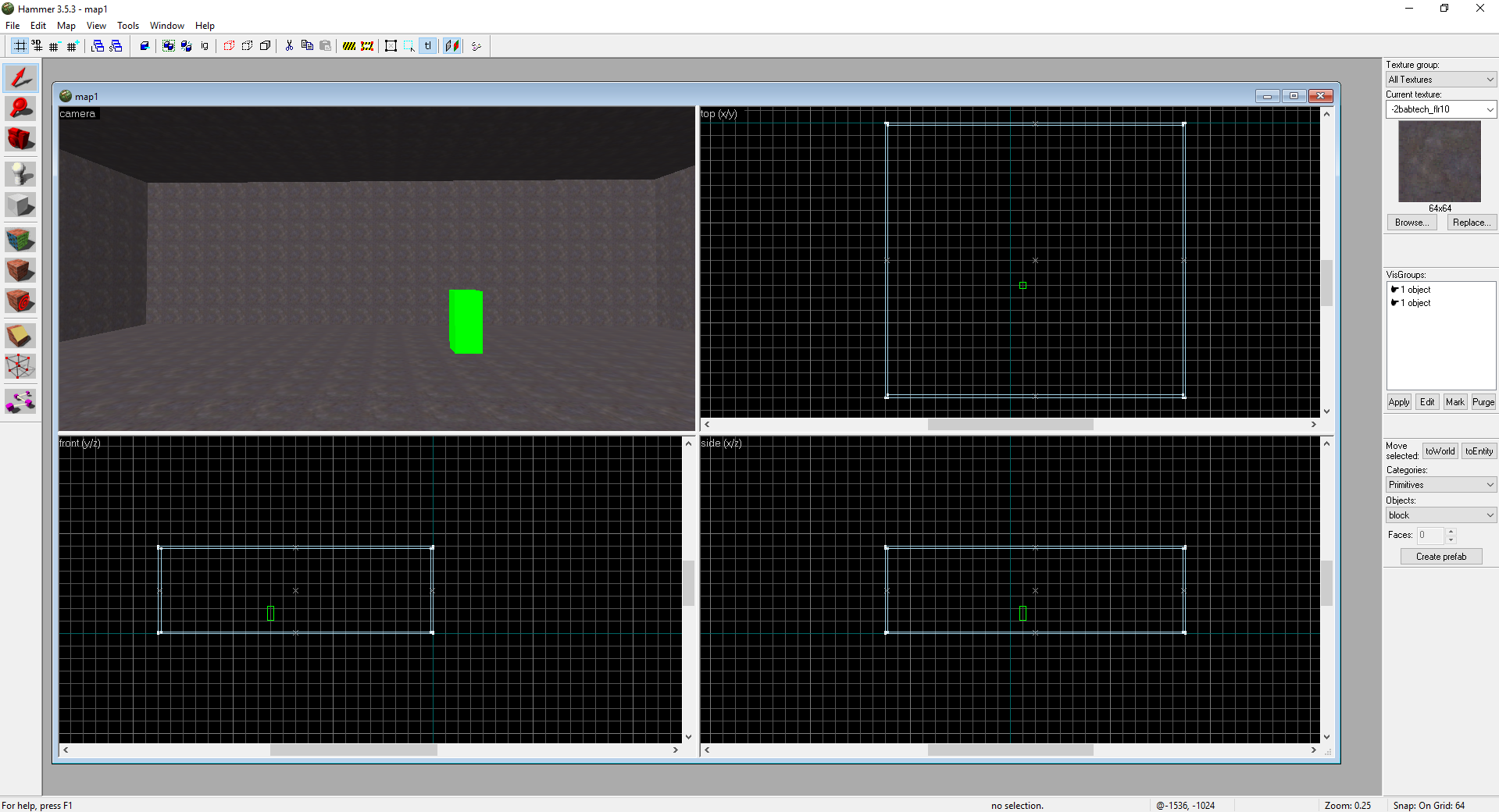 Now we are gonna add sky texture to the side walls and top to create sky in our map. In the Hammer editor its not gonna show the actual sky, just the texture but when the map is compiled its gonna look just like there is not walls at all, but actual sky instead!

2. Click on the texture bar and type "sky" in the search bar. After that select one of the sky textures that appear. 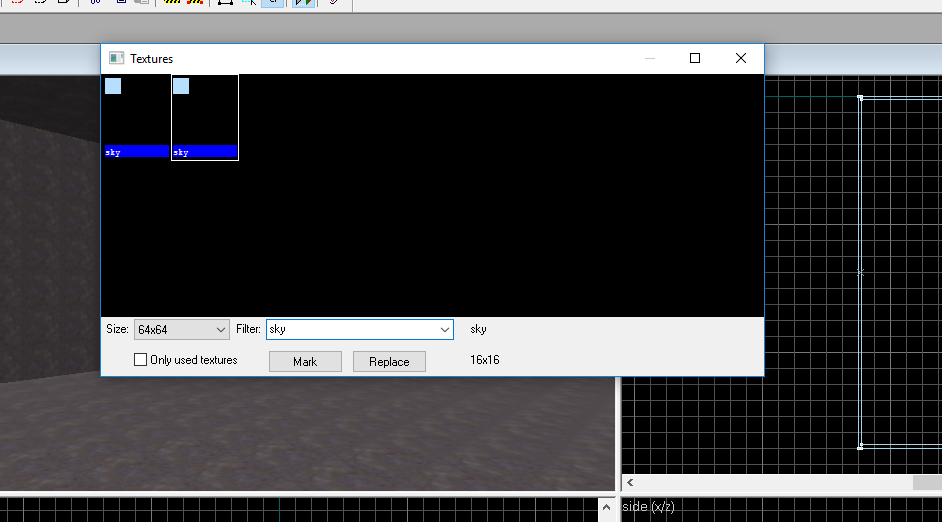 In my case i have 2 sky texture but don't be mistaken this is not different sky at all. Its just that the sky texture is contained in the both .wad files we added in the first time configuring Hammer. There is other more complicated way to change how the sky will look for your map, but its for more advanced mappers and i may explain it in future.

Use "Apply current texture" tool to change the texture to all sides of the walls into sky texture.

Don't use the "Texture application" tools to change only one side of your wall into sky texture! ALL OF THE SIDES OF THE WALL MUST BE CHANGED TO SKY TEXTURE.

3. Now something very important that you need to know if you gonna have sky in your map. The sky texture don't emit light, so if you only put the texture but not additional lightning everything will appear black like this: 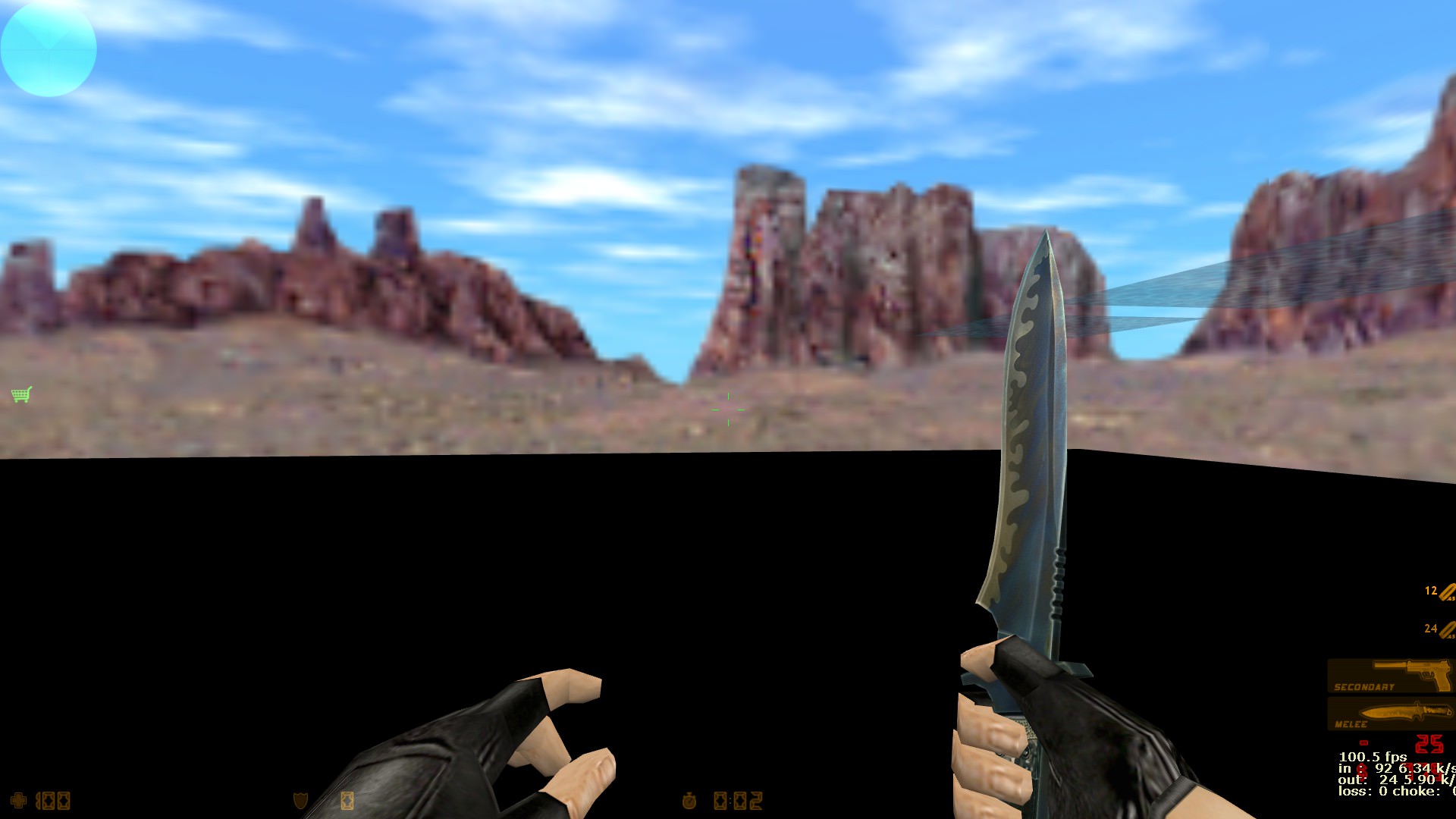 For that not to happen you must use Entity Tool (Shift+E) and from the enitity bar select: light_environment 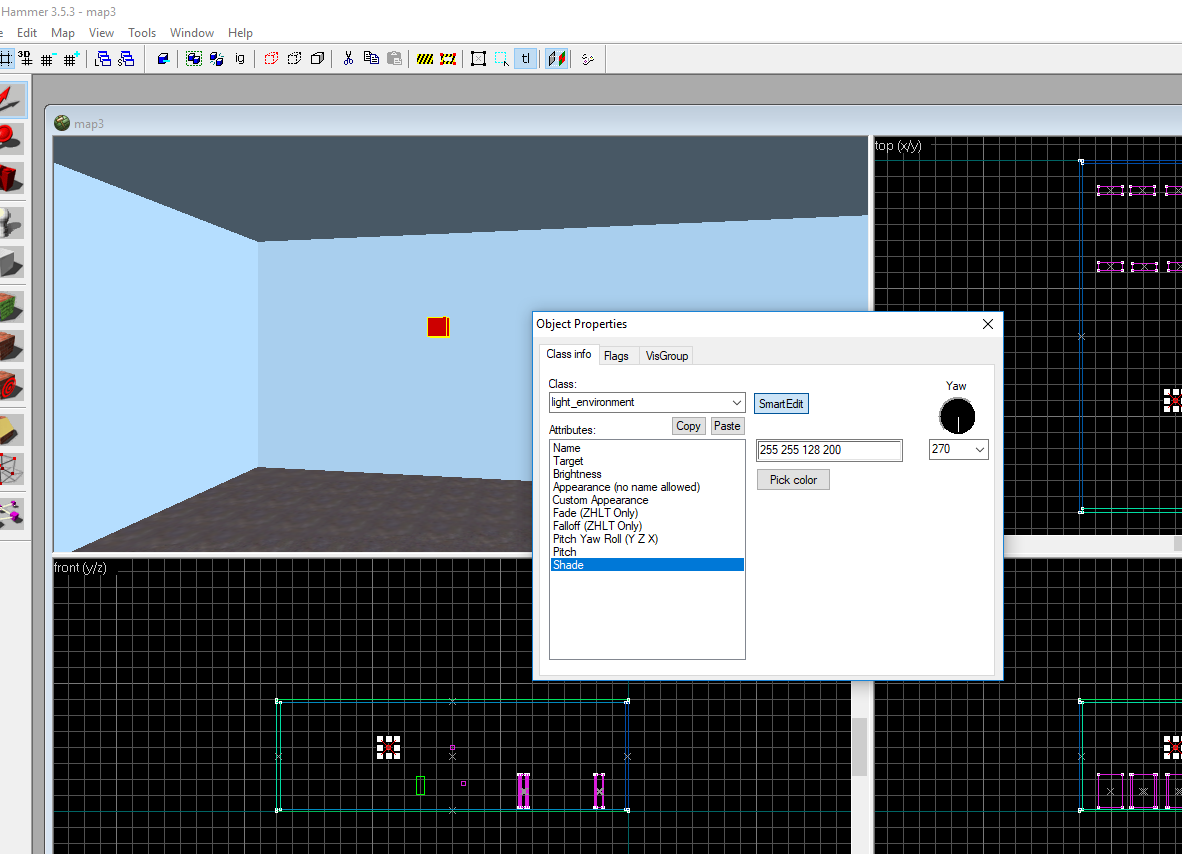 Put the enitity somewhere high in your map, where you can easy recognize it. YOU ONLY NEED 1 ENTITY OF THIS TYPE. DON'T PUT ANY MORE OF "light_environment" ENTITIES AS IT MAY CAUSE SOME BUGS. When you have that type of light, you don't need to put any more light enities to the open areas of your map, but if you have tunnels or something like that where sky light don't reach you definitely gonna need more of the normal lights.
You can access its properties by selecting the entity and pressing "ALT+Enter". From there you can change the angle of the shadow that will appear or its shade color and other things, but for now that's not important.

Object properties window play a huge role in Hammer editor. If you wanna create really good maps you will have to get familliar with every property that every object has and the results of changing its values. Basically this is a way to imput information about in what way different objects will interact and the results can be only seen after the map is compiled and played in cs 1.6.

Now that we know how to make sky and we gonna see how to make water, or other kind of liquid in Hammer. 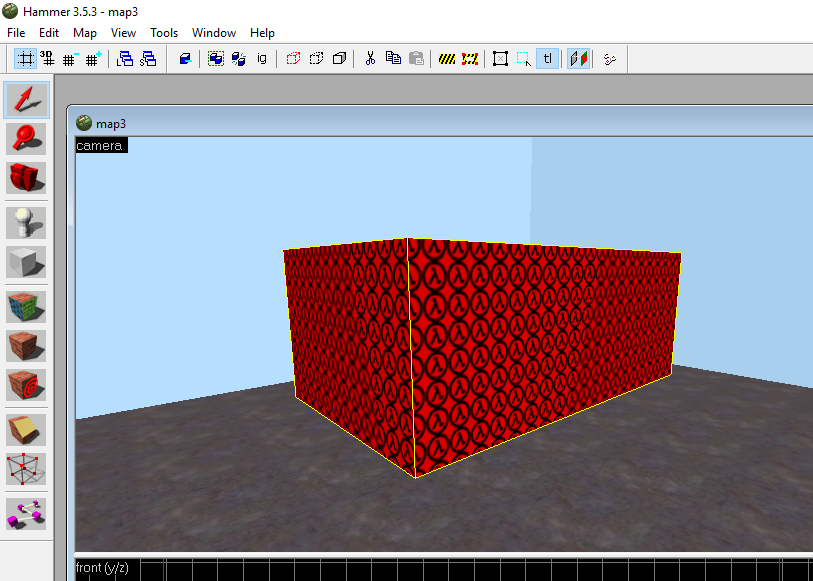 Now go to texture bar and search for water texture. 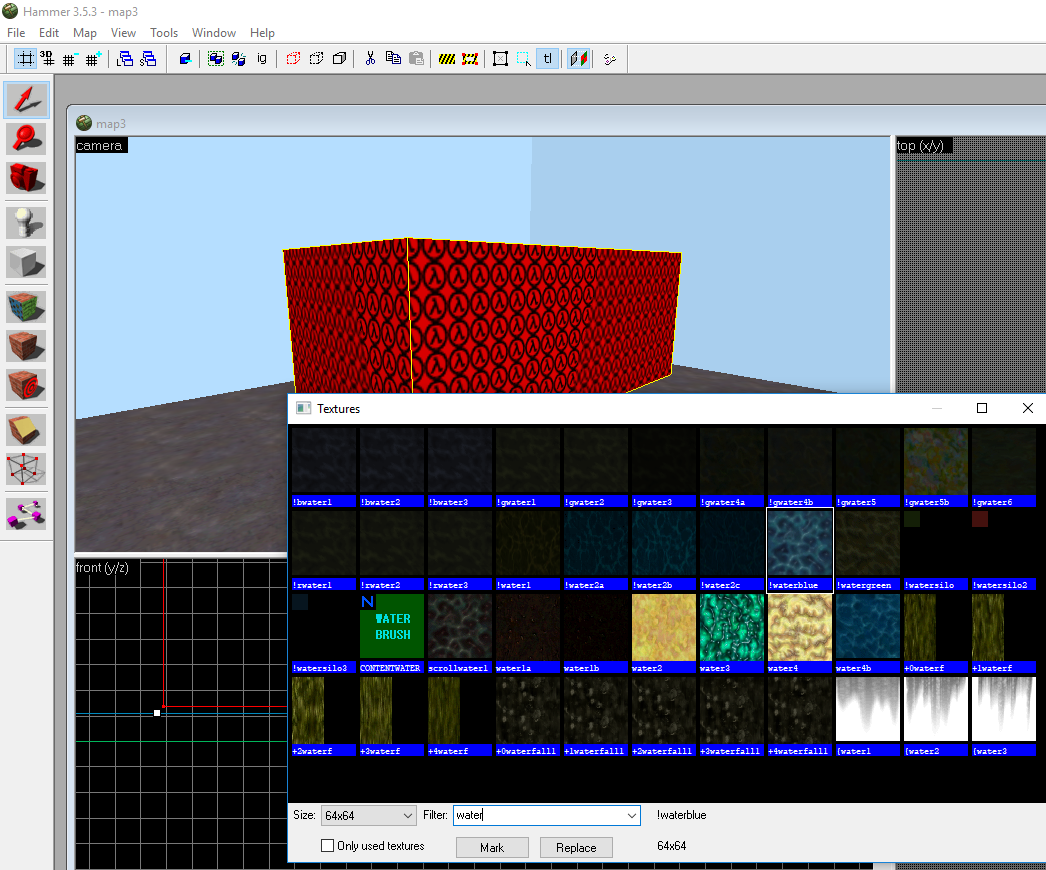 Important - some of the water textures start with "!" in their name.This is special character indicating that this is no ordianry texture. It means this texture contains some properties itself. For example if you use the normal water texture and make a simple block you won't be able to go through it, its just a solid object that looks like water. But if we do the same with solid object and "!water" without even this object to be tied to any entity, it will behave like water instead. But it doesn't really matter which type of texture you will use, if you're gonna tie the object to func_water entity like i'm gonna show you bellow.

2. Select the "water" or any texture you like and then apply it to your block ( not just on one side, but the whole block) while he is selected( if you don't apply water texture to the while object it will give you compilation error when you try to compile).
Its going to appear like this in hammer, but thats not how it will look when the map is compiled! 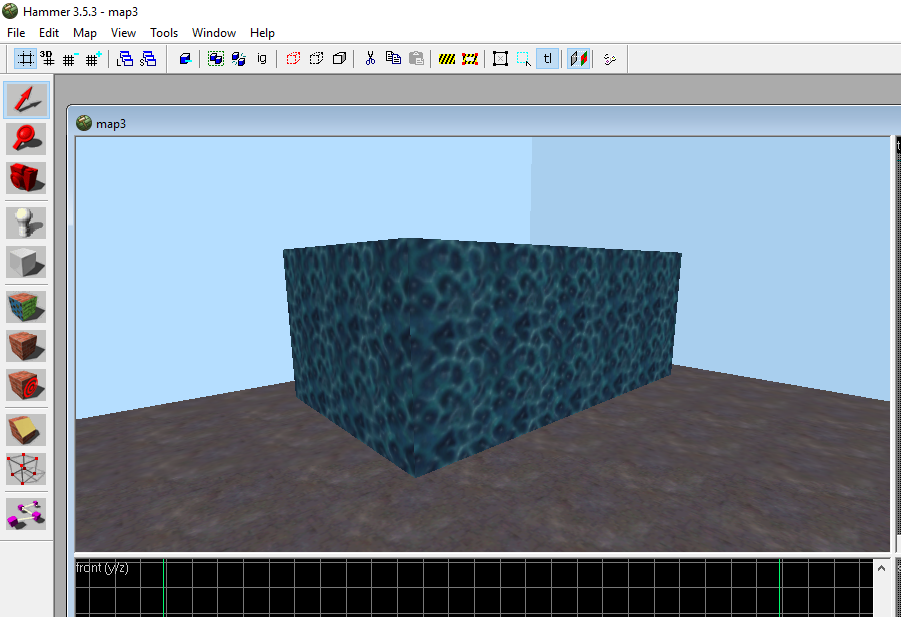 3. Now we are not finished, it may look like a water but if we used the normal "water" texture it doesn't have water properties yet . So now you are gonna tie this block to the entity "func_water". To do that select the block and press "Ctrl+T" (or right mouse buttn on it and "Tie to entity"). Now select from the list "func_water" 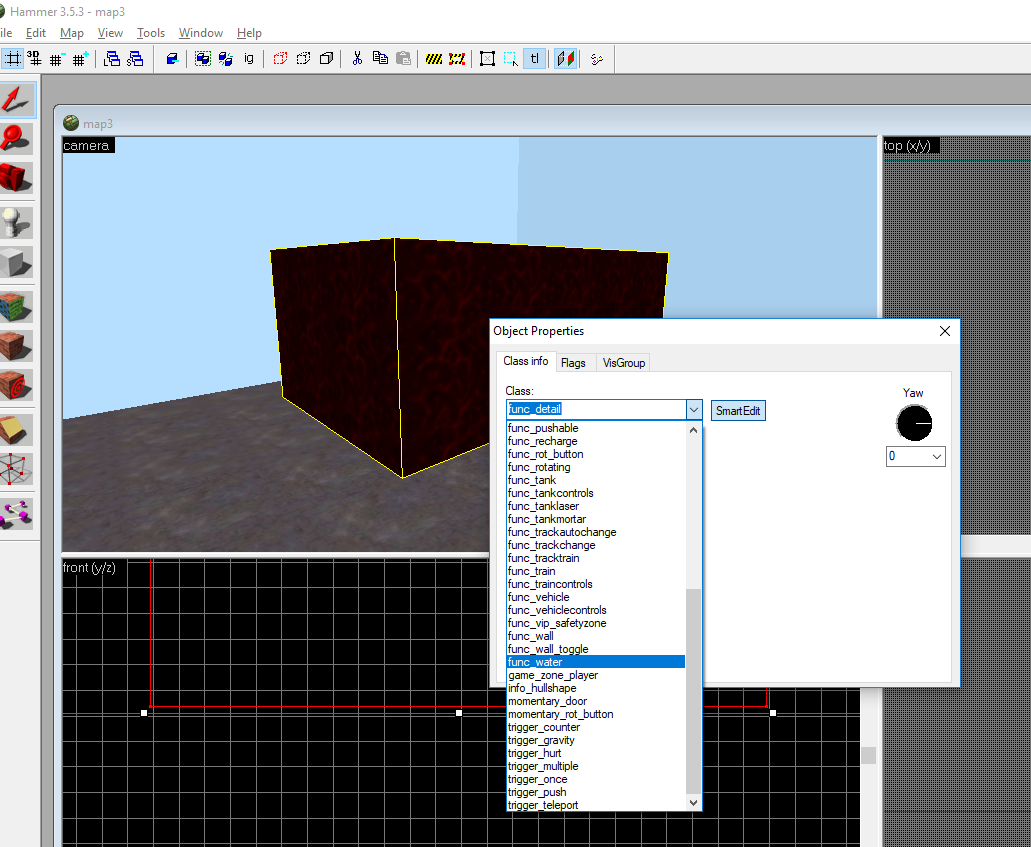 There will be different values for different ways that your water can appers. For now scroll to the bottom of the list and select the content of your entity. If you picked water texture then the content must remain water as it is by default. But if you've used other texture like lava or acid one ,you can change the content so it may not act like a simple water. 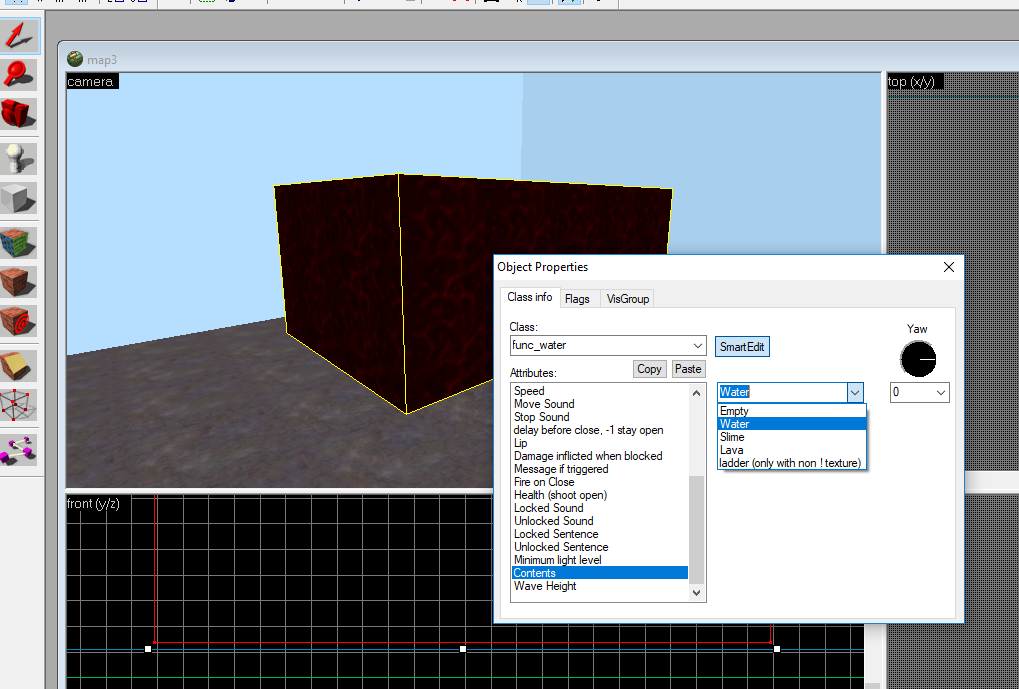 4. Not the water block entity is ready, you can reshape it as you like and put it somewhere in your map.
In its current state the water won't let light getting through, so you won't be able to see whats bellow the surfice, because the water is not transperent. You can easy change that from the Object Properties menu (ALT+Enter on the block when selected). In Attributes there is option "Render Mode". Change it to "Texture - some light" and then click on "FX Amount" and change the value of transparency . By example to "140". 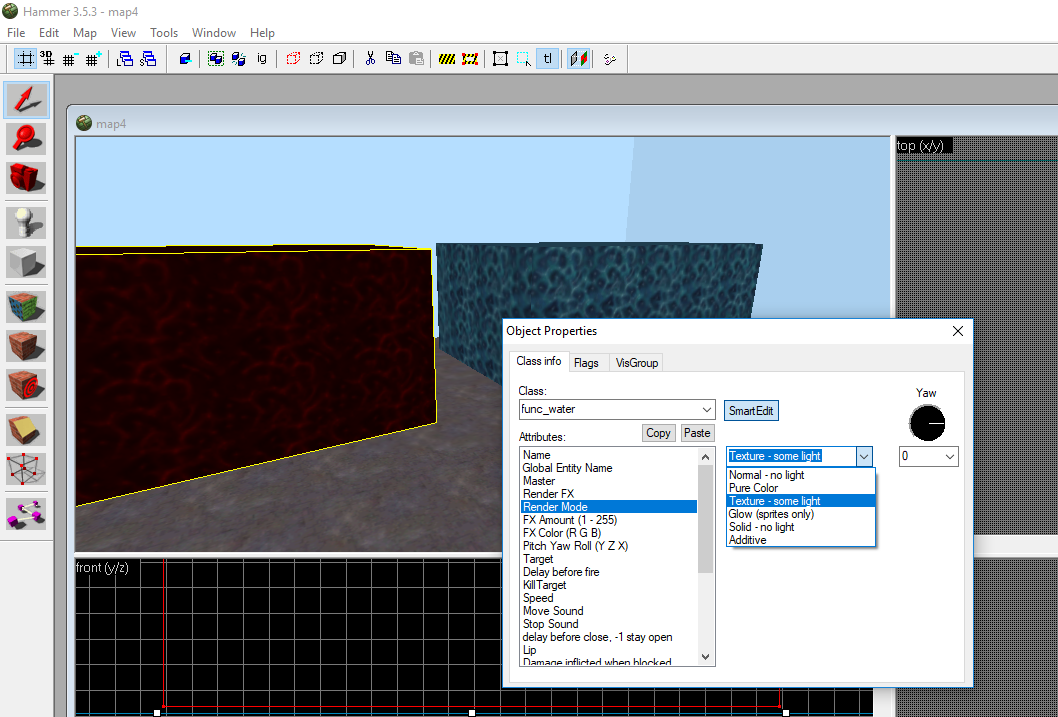 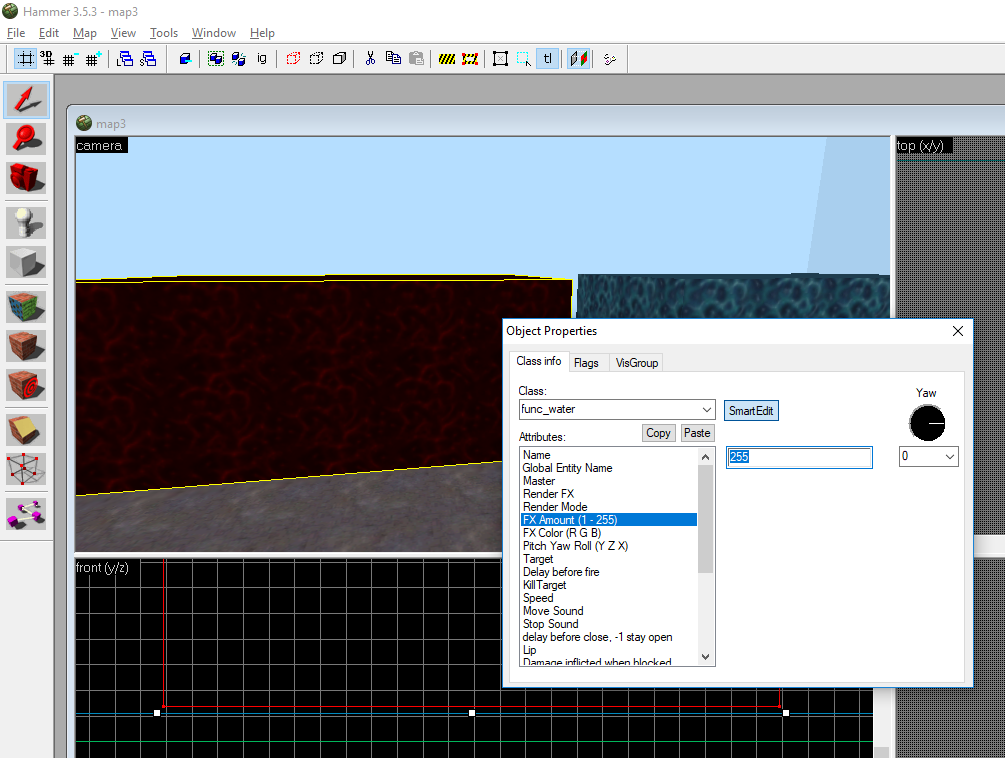 I dublicate the water in the tutorial map so i can show you how it looks when its transperent and when its not. So this is the result, it not what you expected to see, but that is how it works. Only the surface is visible and when you cross the entity borded you will experiance the water properties. 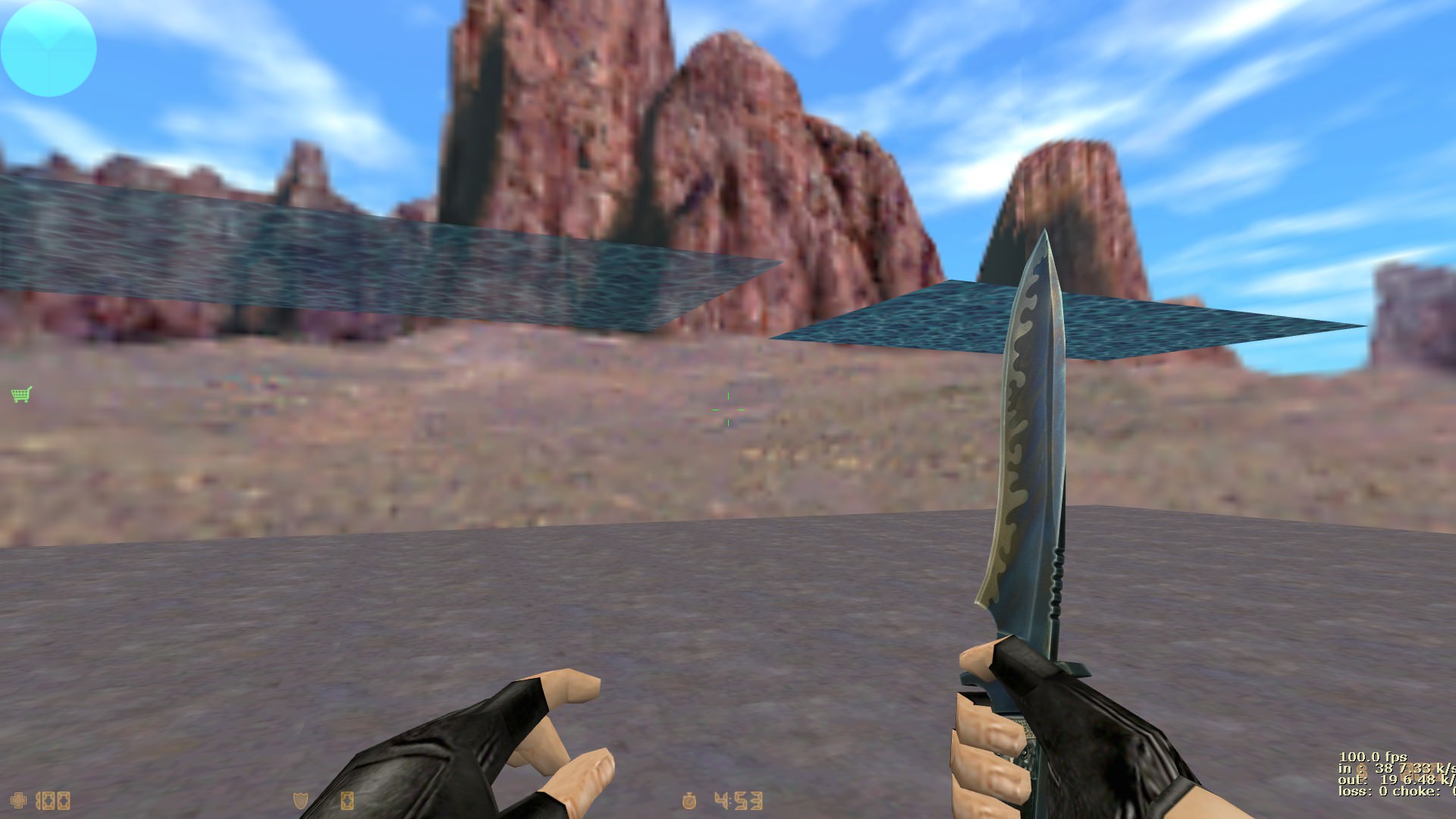 If you wan't your water to be "floating" meaning that it have water texture on every side and behave like that, then don't tie it to entity, just replace the ordinary texture with the "!water" one and that will do the trick.

1. Again create simple block and apply "glass" texture to it. 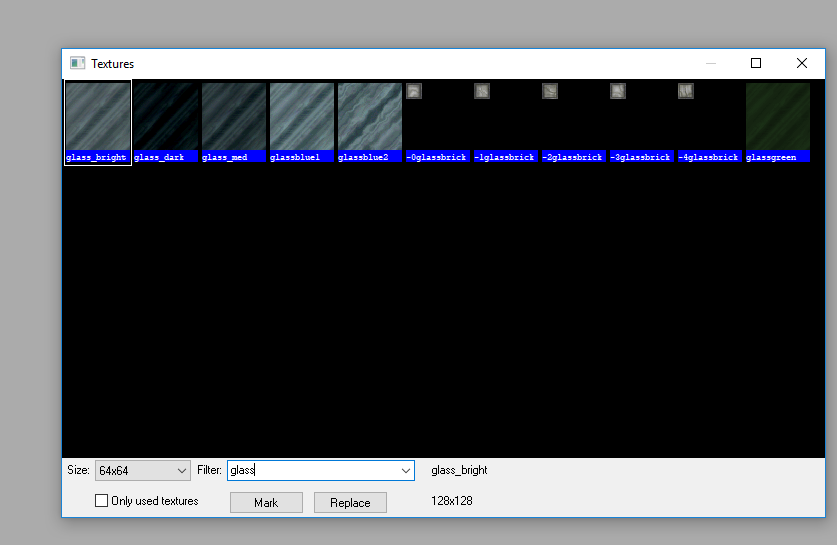 2. After that select the object and use "Ctrl+T" combination to tie the object to entity "func"wall". The attributes are pretty much the same for all solid entities, so it doesn't take much to understand it. And just like the water you can make change your object transparency like we did before. 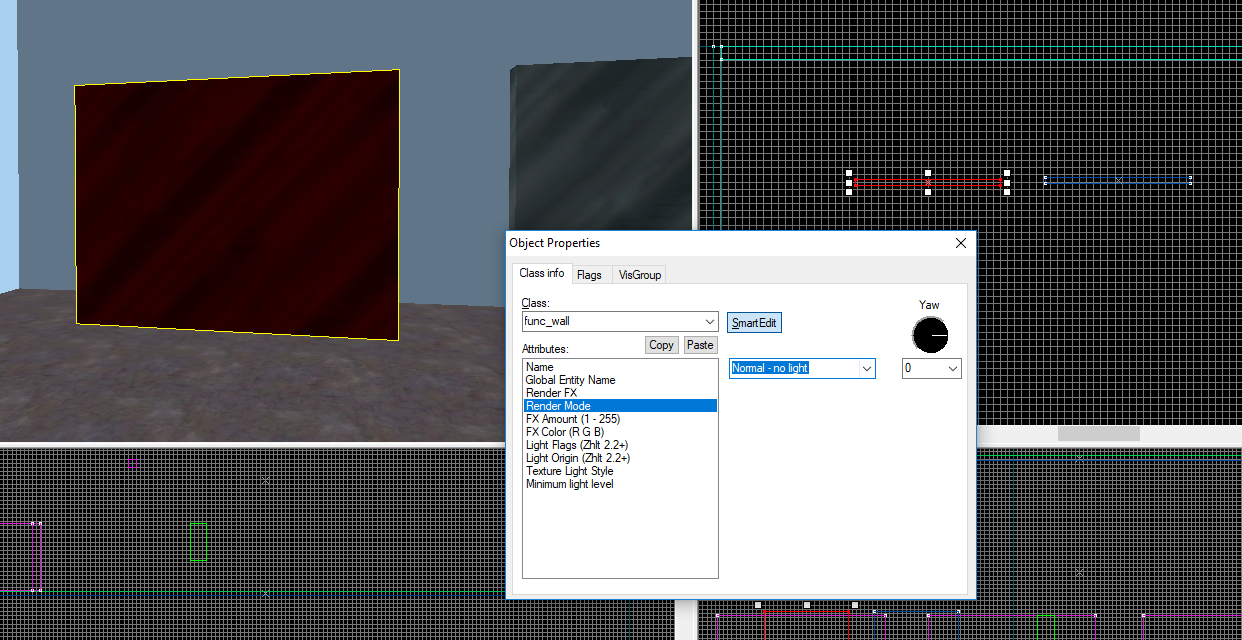 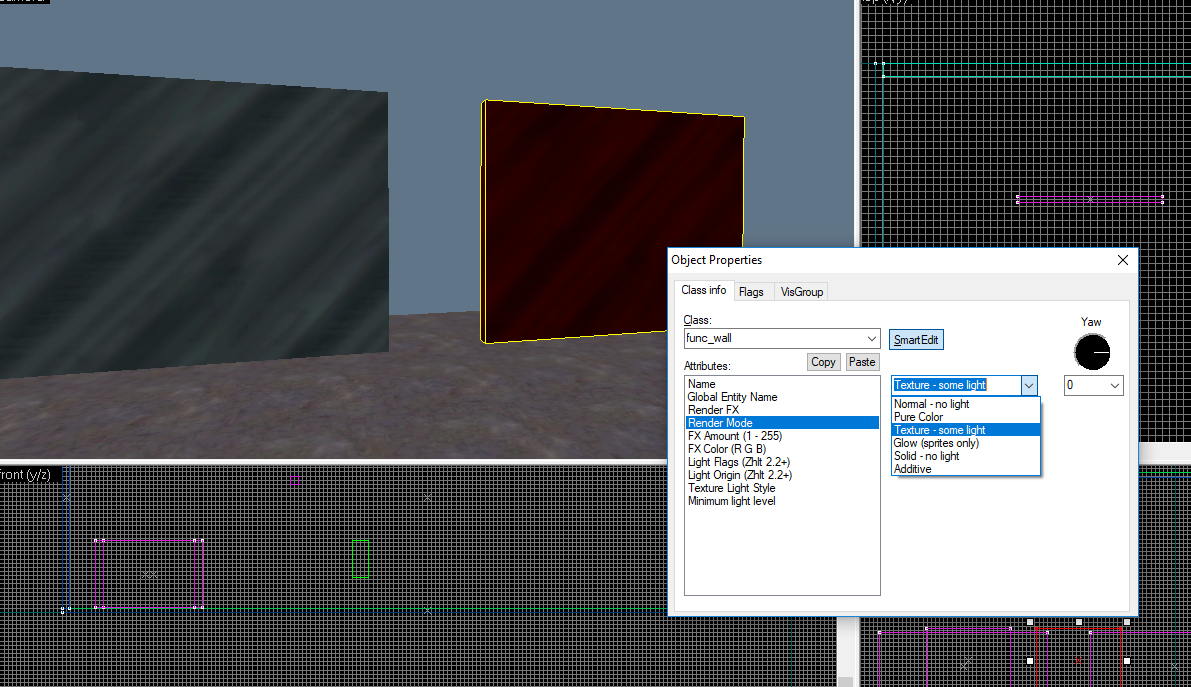 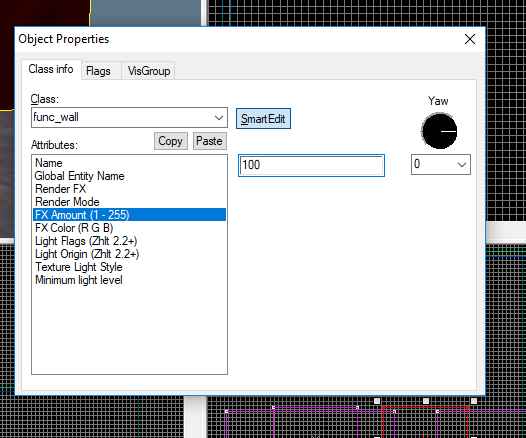 And the final result is this: 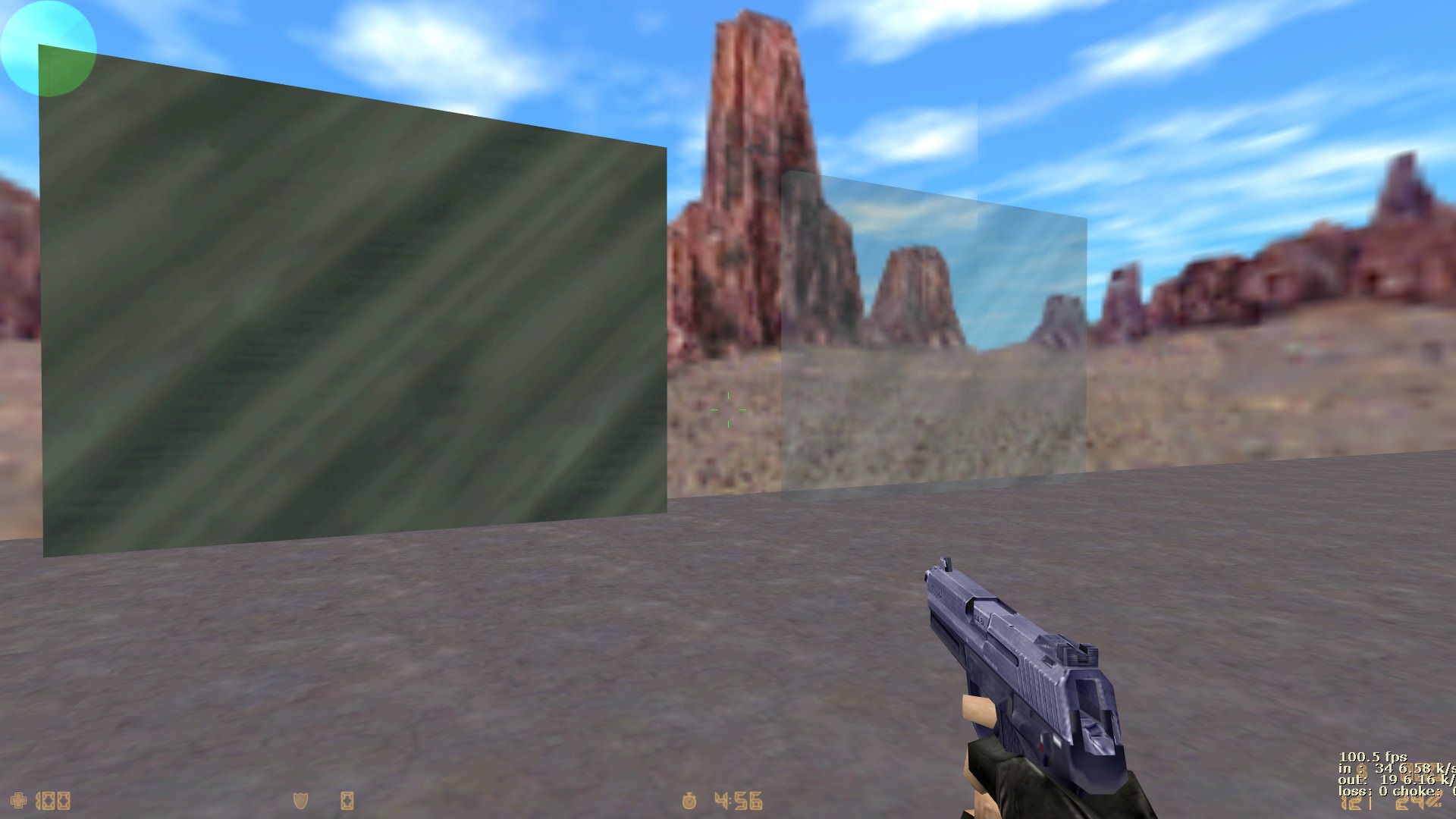 Just so you know a glass maded like this won't brake after shooting it. There is another entity for making it break and that will be explaind in the next guides.

After all that you must be able to make simple maps containing default skybox, some water, which sometimes is more than enough to make decent maps. From now one i'm gonna make make these guides more advanced, but in order for you to be able to understand them you need to practise what you've learned from these guides until now. Experimentint with things is really the best teacher of all, just try creating different solid entities and with different parameters and see the result for urself.
2 x
Top
Post Reply
1 post • Page 1 of 1