Do I have to introduce myself? - No, you don't. but it would be nice to say hello and get yourself known into the community.
Post Reply
28 posts

So recently I have made some major updates on some old plugin plus I added new so I decided to make a new topic as we had in the past, and let's start with the changes:

New plugins added:
Admin Groups - say /admins to check it out
Command Blocker - to block certain commands from using, user side
Custom Shop - more feature-full and updated plugin than the last one
< D.I.C.E. > Ultimate Roll the Dice < R.T.D. > - a better version of RTD
Fast Knife - you walk faster with knife
Gametracker: Player Page - gt links in the server, say /gtlink or /gt to see
GoSpec [ /spec; /back ] - cause I am tired of the ream menu, say /spec and /back to test it
MOTD Commands - easier way for me to add all bunch of commands as /rules or /forum
Random Health on Round Start - self-explanatory
Remove Immunity - hehe for bad admins,
Simple Demo Recorder - updated one
Style C4 Timer - bomb timer look cooler now
Team Advantage by OciXCrom - suggested by Nojarq for more balance
Models Menu - new skins are added including: Michael Townley, Emma Hewitt, Carl Johnson (CJ), and Tommy Vercetti.
Fire in the hole REMOVER - cause I am sick of this spam on the chat

TODO:
Edit the say menu to contain more appropriate info and commands
Adding a motd with all useful commands in the server plus chat add
Gag plugin to show when gag is being made on the chat instead of the hud
Enabling Jetpack for me and Nojarq only
Restricting fireworks to admin only
Eventually updating the prefix plugin with newer

I think that's about it, hope now you are well informed on how I am spending my recent days and don't hesitate to give you ideas below or in the appropriate forum.

Map Rate added - to somehow help in understanding which one is better
Ptahhotep's Team Balancer - team balance again
Map Spawns Editor - to address this issue on some maps
All Prefixes are normalized, meaning everyone is getting a prefix which states his position on the server, more info here
New changes to the VIP System now are being applied, more info here
Gag plugin is changed to this one.
Added message in the middle when you are dead is changed from:

Main menu (say menu) is updated with this shortcuts:

-Rework of Auto Balance Plugin.
-Will balance teams so they both have players with high amount of kills in both teams.
-Prioritizes players with most kills now.
-Works on Admins now.
1 x
Here in the forest, dark and deep;
I offer you, eternal sleep.
Top

mdbBansv4.8 has been added to the server.
More here.

I have added a menu with boost info as well as info message in the chat about it.

say boost or menu to open it 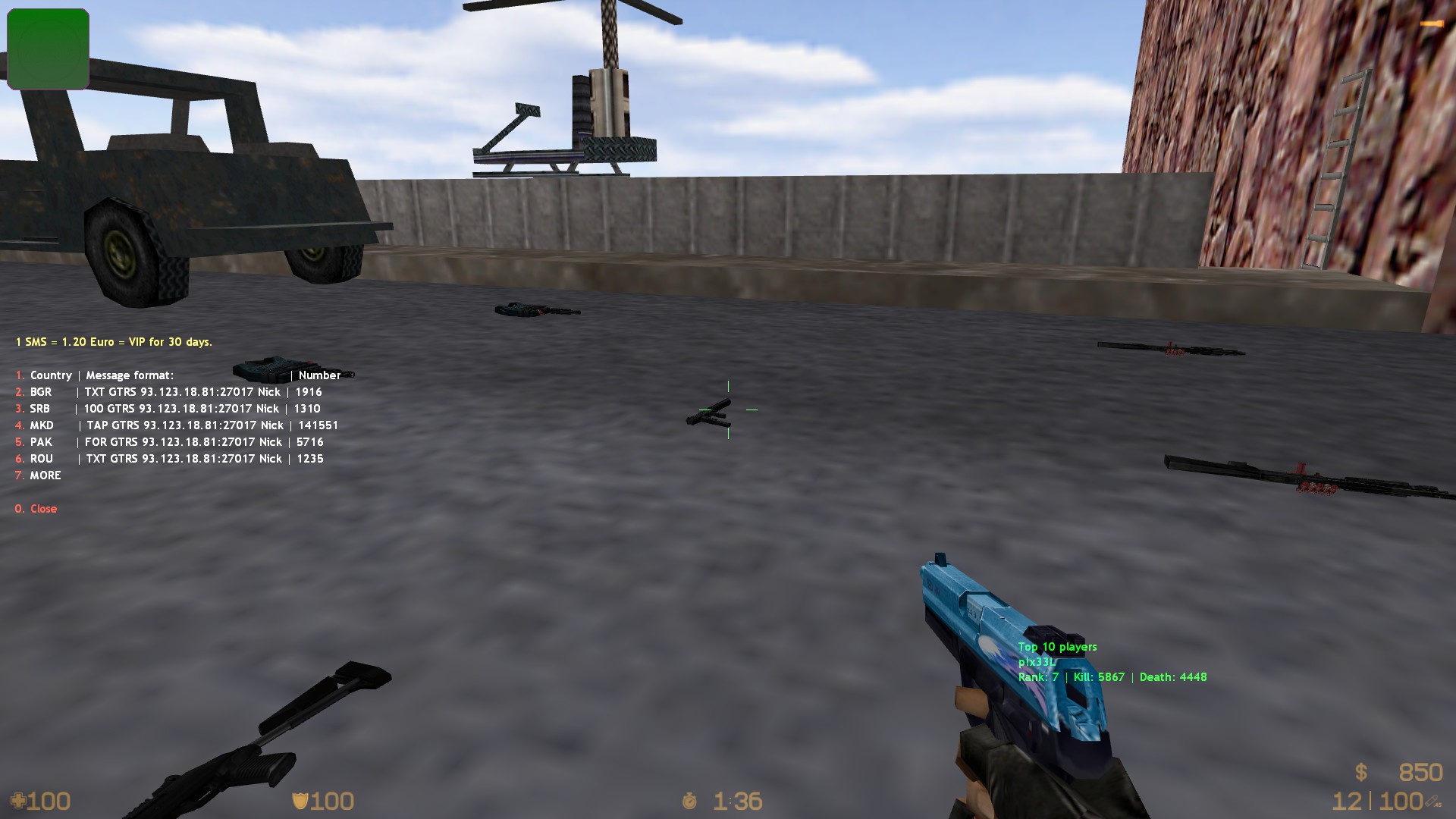 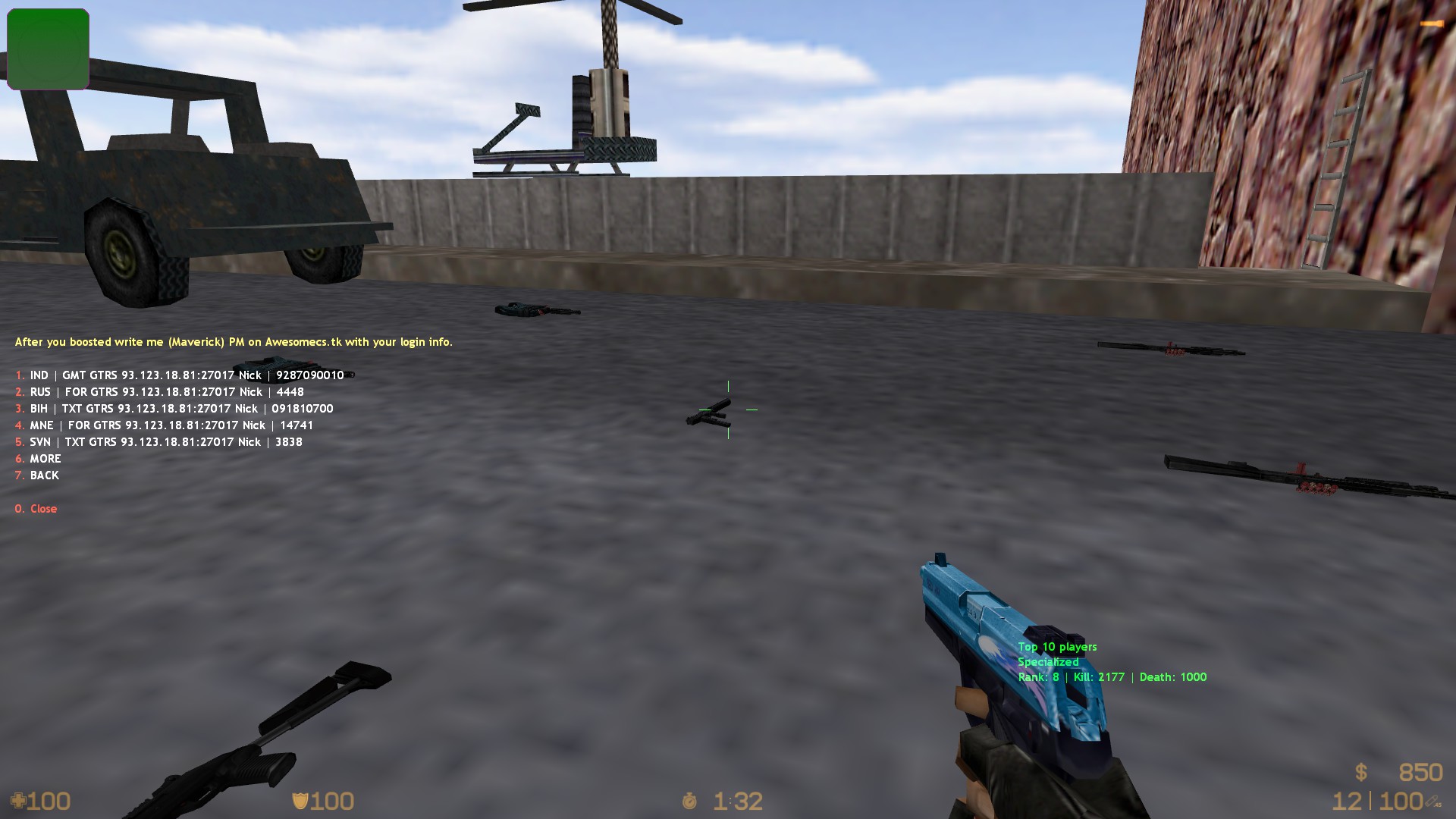 3 x
Here in the forest, dark and deep;
I offer you, eternal sleep.
Top

Couple new maps have been added to the map cycle: Link
0 x

A Bad Camper plugin is added by a suggestion for a such from Mr.Roller. Although it will need a little bit of tweaking of the setting it is expected to decrease camping somewhat.

Couple new maps have been added to the map cycle: And some were removed.
Also, I disabled the AWP for T on as_crazytank3
2 x

Admin Spectator has been added (suggested by Mr.Roller) to help admins decide easier who is wall hacker and who is not. It turns on with W key and S key will disable it. It is recommended to keep it disabled until you find someone suspicious.

Description:
This plugin allows admins who are spectating and are in 'first person view' of another player to see the enemies (and teammates) of that player through the walls. This may help to catch wallhackers

Force Round End has been added to forcefully end the round on maps without an objective because on some maps it takes forever to end the round.


Description
-Have you ever want that maps without objectives to end when the round timer is 0? Well this plugin is for you.

Round time is now 2:17s, 13 seconds less than before (2:30s), again to help the faster game and more rounds.
Camp meter now will need 5 more seconds to reach 100% in total 40s, cause yashveer cried a lot about it.
dm_ambush map is removed
A couple of VIPs have been removed.
1 x