First of all follow these simple rules when you post your VIP Application if you want to get an approval.

Your topic title have to be only your in-game name!
Your are allowed to have only ONE topic!
Do not make pointless comments, filling your topic with spam!

Not obeying the Rules above will result in forum warning and your topic will end up in the Recycle Bin!

1. Your Name
2. Your age
3. Where are you from
4. Your gametracker.com page about the server - Example
Just type your name here 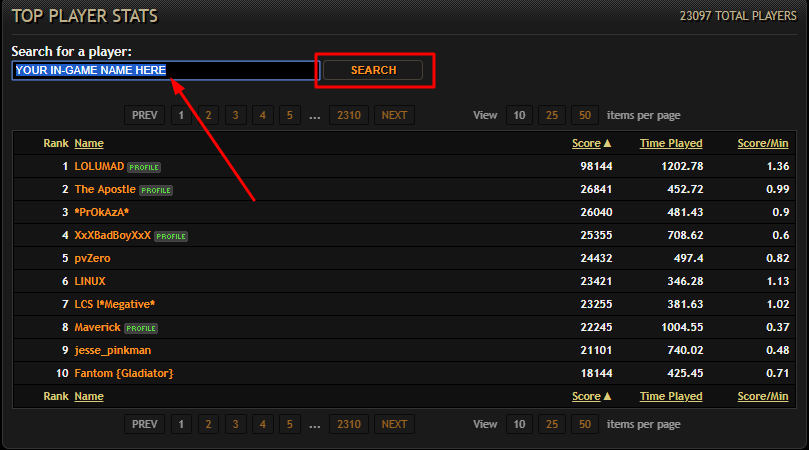 5. Why do you think you deserve VIP (Very Important Person) status
Example Application
1. My name is Maverick
2. I am 15 years old
3. I am from Bulgaria
4. This is my Gametracker link about this server: https://www.gametracker.com/player/Mave ... .81:27017/
5. I am a good friendly guy who is speaking with everyone while having fun and enjoying life in the server. I think having VIP will help me have even better experience in Awesome Cars.

Let's say that you got approved by our Admin team and you have been that much active for past 30 days. Then ↓

6. You must send me a password with which you will enter the server as VIP and exact in-game name as a private message on the forum or I will not make you a VIP.

Your application will be rejected if:
* Your application is not written acording to the requirements.
* You are not actively looking for support and aproval of your VIP.
* You are desperately begging the admins to approve your application.
* Your behavior is toxic or childish.
* You ever have been banned.
* Has not been 3 month since your last application.

Maverick wrote:Make sure you make everything in your power to get approved including looking for support from the admins and even the players. Do what it takes so we can see you are stubborn enough and you won't give up until you got it.

Nojarq wrote:If you lost your VIP due inactivity without notice in the forum, the time for getting VIP again after application must be extended to minimum a month. People shouldn't take the word "loyal" lightly, it should mean something. If you are VIP in Awesome Cars Server then this is your main server before others.

Nojarq wrote:You must be an active and friendly member to the awesome cars community

What you get as VIP Player!

Simple and Easy info board that is in the server as well.
Last edited by Maverick on Tue Nov 20, 2018 5:42 pm, edited 6 times in total.
Reason: added more clarifications
3 x

Checkout also Nojarq topic about that, from which I got some points.
0 x

Good Work. Hope people will follow the rules , not only the ones who are applying for VIP but the ones who are commenting.
It used to be like "also don't forget you need to be approved from anyone of these server admins" .. and we used to comment on the posts regarding VIPs and then again , same thing happened people made their own rules and started commenting on the VIP applications. It was the Admins who could approve not everyone . And it's been going on since several months that all normal players started voting like "Yes he is regular, friendly, he deserves VIP" "Maverick he is a good player , make him VIP" wtf ? No one asked you guys ? Didn't you read the rules about application ? This is the reason all of the trash is on forum and spamming and all of that . e.g: Fun da king's application ? What happened with it ? We know how someone behaves on the server , to vote for him or not . When 2 of the admins wrote that "No, you don't deserve to become VIP" then why the others kept commenting and spamming the post ? The VIP applications are not for fights , it's only for "The Application itself" and replies by admins if they think that guy should be VIP or not , that's it ! Keep it simple and clean . Why stupid question/answers and stupid fights ? Who made it 10 pages Application ? It doesn't even makes sense a VIP application and 10 pages ? It should have been 1 post for applying and 4-5 replies of the admins that's it !
E.g: He posted an application
Lolumad : No, right now you don't fulfill the requirements or his mentioning his cons etc .
ME : No, you have to change your behavior and play a lot more etc.
(That's it , no more spamming )
and if some admin thinks he deserves he will comment yes , i disagree with saad and lolumad , he deserves to become VIP etc.
Then we can check his attitude and spec him a alot more that if he really deserves it or not and comment later what we think.
But many people made it a debating corner , provoking him so that he replies and they reply back and their childish fights. I remember , i once wrote that stop spamming this application they stopped for a day and then again started doing it .

Not with only his application but with many others and since several months. So i think maybe you should change the rules , it was some specific admins before only, maybe change it or ask the people to obey rules .

Sure I couldn't be more agree than that. VIP Application with 10 pages, should not exist at all and that shouldn't happen from now one although one of the reason might be I personally continuously merge his new topics with his old one and it grows and grows. So maybe instead of merging, we should be sending them to the Recycle Bin? What should we do in these cases in your opinion to avoid 10 pages topic?
Maybe adding a rule:

Yes , we can send multiple applications to recycle bin too.
And yes No useless comments on VIP application by anyone .
Lets see how it goes

Users browsing this forum: No registered users and 1 guest